MAKE IT BLUE 2017 is finished…the volunteers left for their home countries, the school hosting the volunteers got cleaned and empty, the ACARBIO staff returned to the office, the material stored at the basement until next year. It’s the time that vivid emotions calm down and everyone takes a step back to think about the previous days. Some simple statistics show that during MAKE IT BLUE 2017 there were:

Those are some statistics, but it’s impossible to include in them the countless new experiences gained in this workcamp. However, this article intends to give just a taste of what it feels like to be part of the Make it Blue project.

Getting to know each other

People arriving from different parts of the world, having small and long talks with each other, learning how to live together, how to work together towards a common aim, exchange languages, recipes, smiles and have fun. It’s very easy to meet new people, but you need certain conditions to come close with them. It seems that Make it Blue offers the right circumstances that bring people together. Volunteers of each camp have the chance to meet and become one group. But it doesn’t stop only there. During the Make it Blue 2017 there were 4 workcamps, each one lasting 15 days. When it was the time for the old group to go and the new one to take over the groups met and spent time together. The old group accompanied the new ones to the beach and helped them to get to know their job and how to enjoy it. They also had the opportunity to have fun, play games and have meals all together. An important part also played the intercultural exchange. Through the means of language learning or cooking together we got to know Serbian dumpling desert, Mexican stew based on Coke, or Italian limone e mente where you eat the whole lemon including the peel. 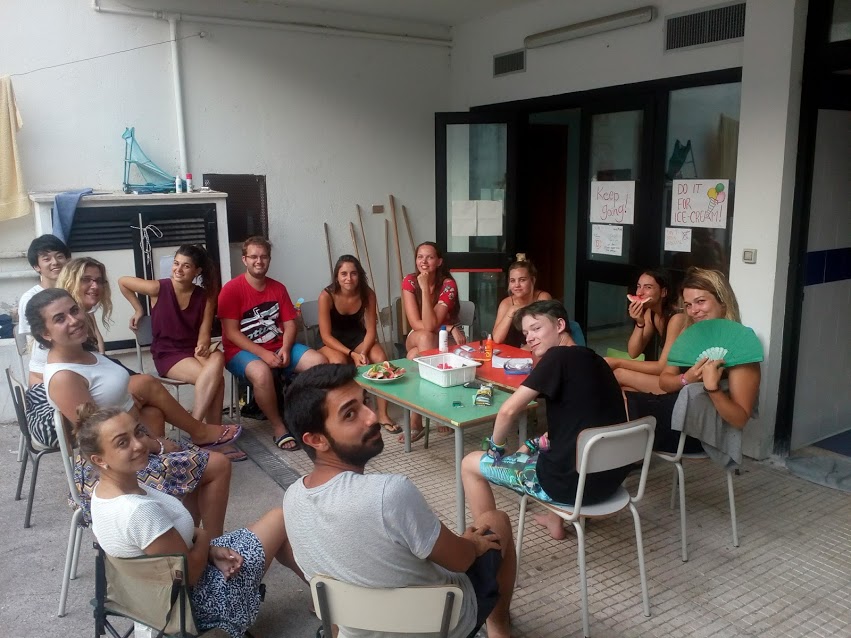 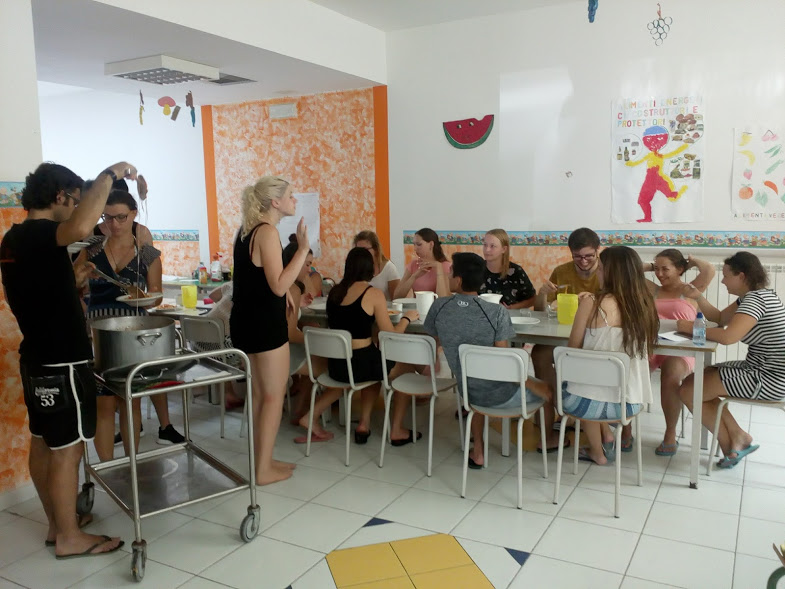 The days in Minori have variety…The volunteers work in the beach collecting trash along the coast, sorting them out and throwing them to the right recycling bin, as well as getting to know in practice the principle of 3 Rs -reducing, reusing, recycling. Other than the beach, they make sure to keep the sea along the coast clean by sailing the paddle boat and collecting floating trash. They also make sure that the dock of Minori is kept clean. Last but not least, the volunteers participate at the environmental workshop for children, where they use games and activities to cultivate environmental sensibility to the children. Volunteers are a significant example for the local community, as people watch them daily taking care of the local environment. 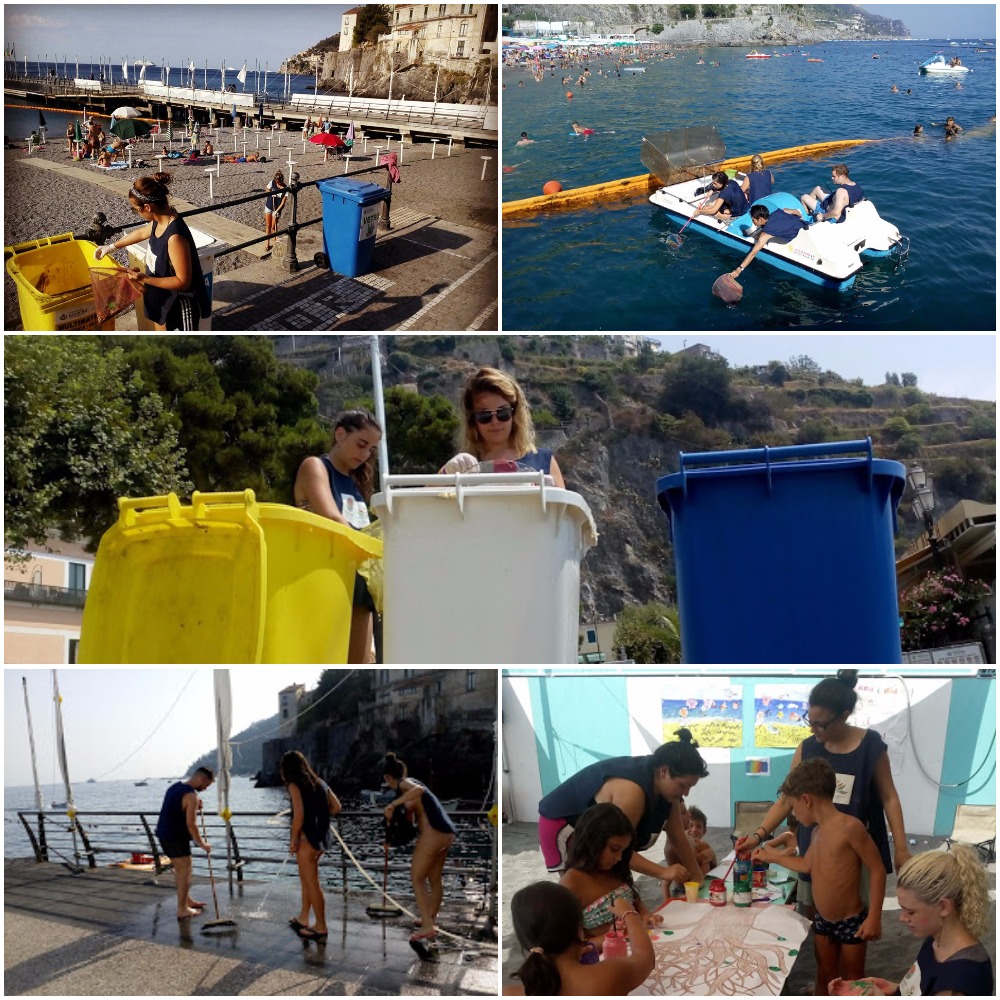 Because the Make it Blue project is not only about cleaning, volunteers set a good example and they find other impressive ways to raise awareness about the environmental issues. While several fires were holding across Amalfi coast, the volunteers turned this unpleasant occasion into an opportunity to raise their voice about fires. Therefore, they organized a flash mob at the beach.

Moreover, a common observation of the volunteers was the hundreds of cigarette butts collecting in the beach every day. For long time, there were discussions on what we could do with all these and the idea of organizing an exhibition came up. Volunteers found the way to use the cigarette butts on the most creative way that for sure attracted the locals’ attention and, of course, their congratulations for their work. While the exhibition was on, some performances took place on the same subject to activate the locals for this issue. For example, an 80-meter-long line of cigarettes crawled around the Minori promenade one day. Bottles full of cigarette butts blocked the way to the sea the other day, while volunteers spread their word with written signs. 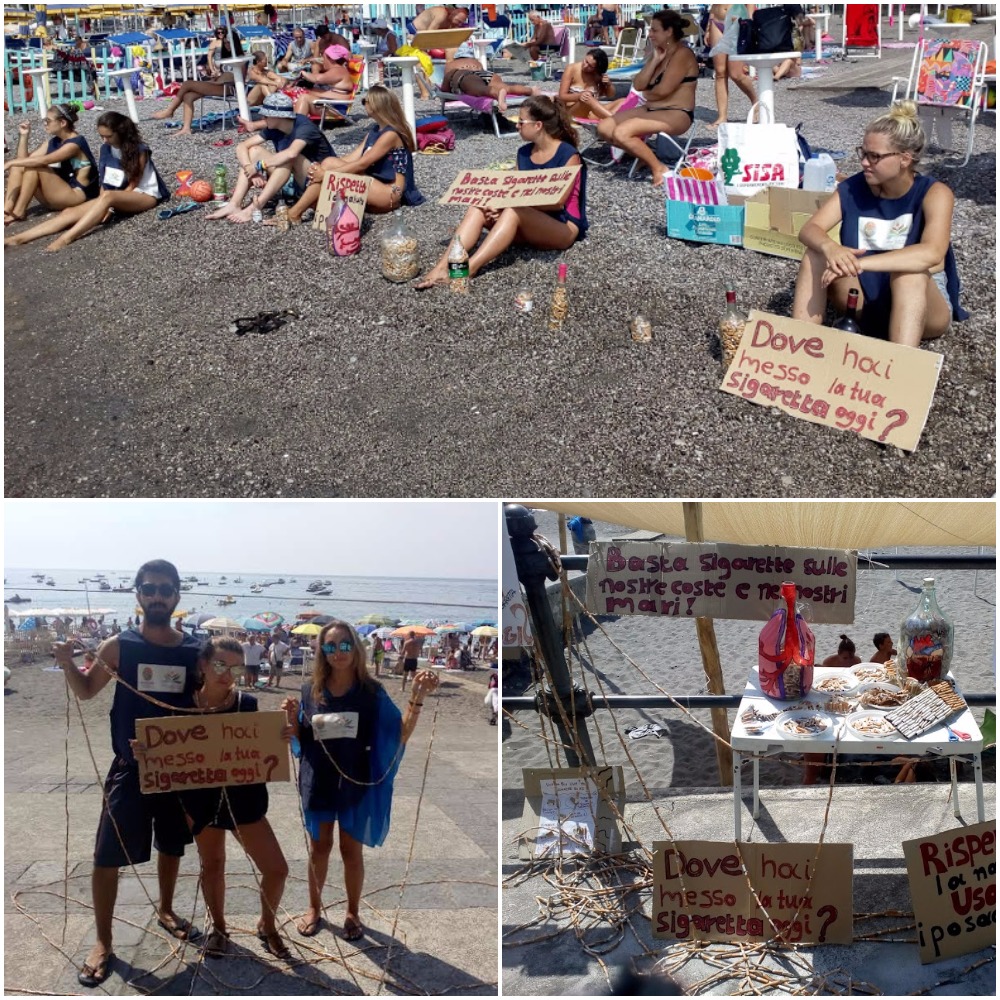 It couldn’t be missing the closing flash mob, when volunteers threw a beach party for saying goodbye to the people in Minori and reminded them to take care of the coast.

Volunteers’ work was appreciated by the people in Minori, who noticed that the young foreigners in a daily basis keep the public beach clean and use many ways to involve more people into that. The spontaneous “thank you” of the people in the beach highly motivated the volunteers to continue their work and feel more engaged with the local community. This feeling was reinforced when residents of Minori passed by the school to talk to the volunteers, offer them a local dessert, cooking lessons and be involved in the cooking teams by giving them an Italian touch. It feels so nice when your selfless work is recognized and appreciated. 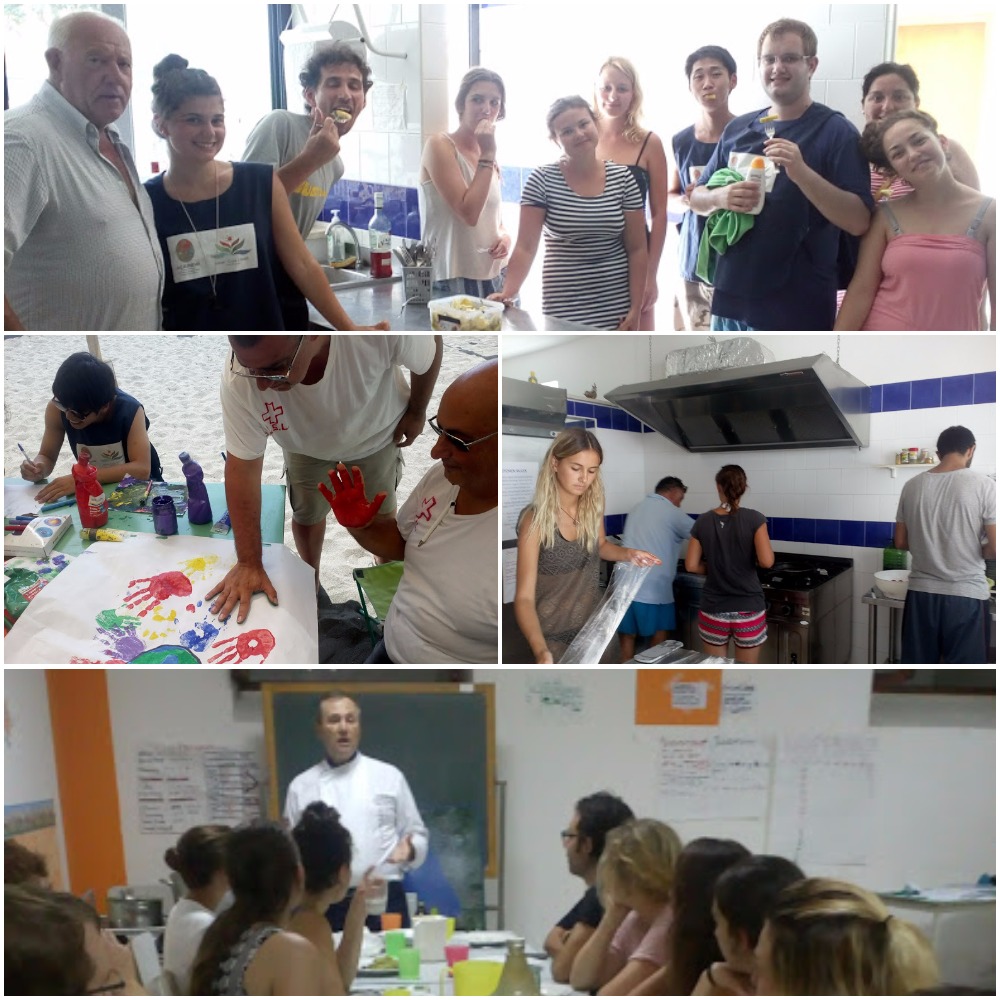 In Make it Blue work comes first, but when work ends it’s when the party starts. Endless nights in the beach, lemon fest, lemon path in Minori, Villa Romana, traditional fests in Tramonti, ferragosto fireworks, excursions across the Amalfi coast, spa are just some examples of how free time is spent. We tasted the regional Re Fiascone tomatoes, homemade limoncello, homemade wine, the famous Mexican Mezcal and others. We went alongside the coast to stay on lonely beaches, in caves, or jump from rocks. The best part though it’s that you share all these incredible moments with amazing people from all over the world. 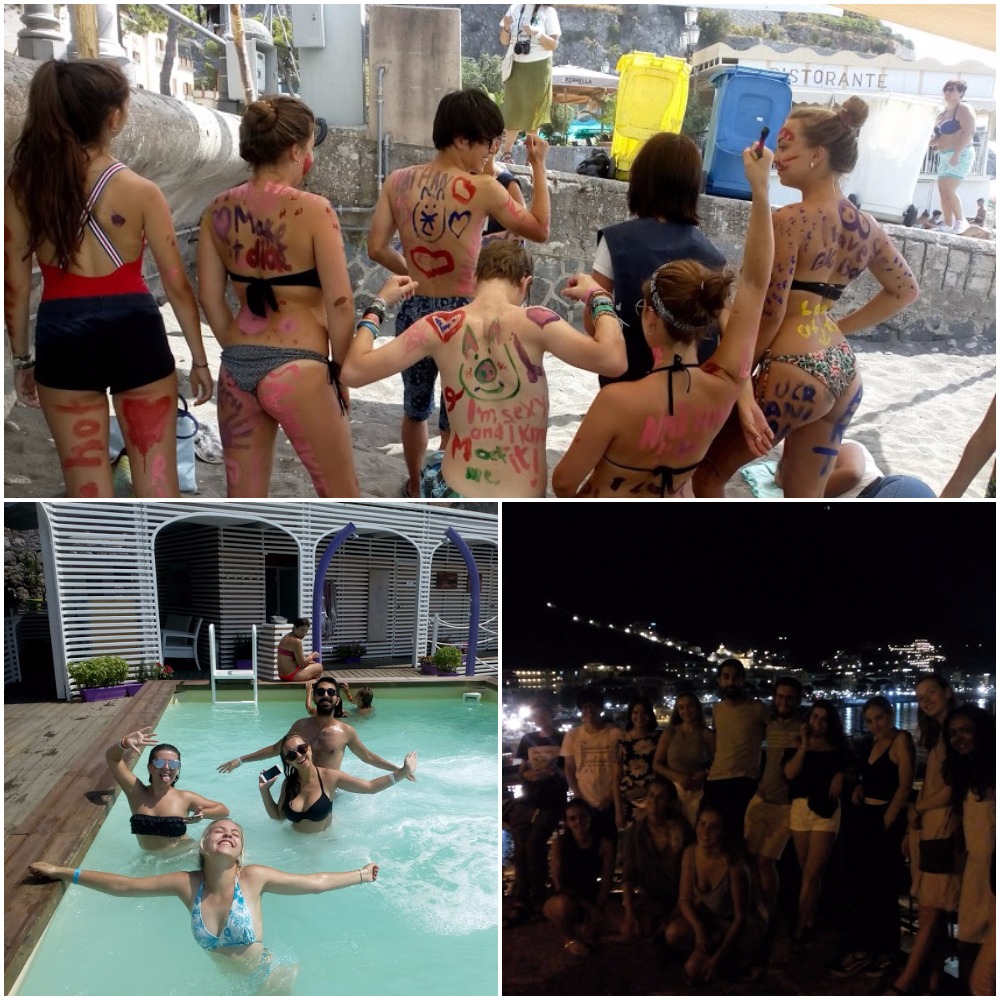 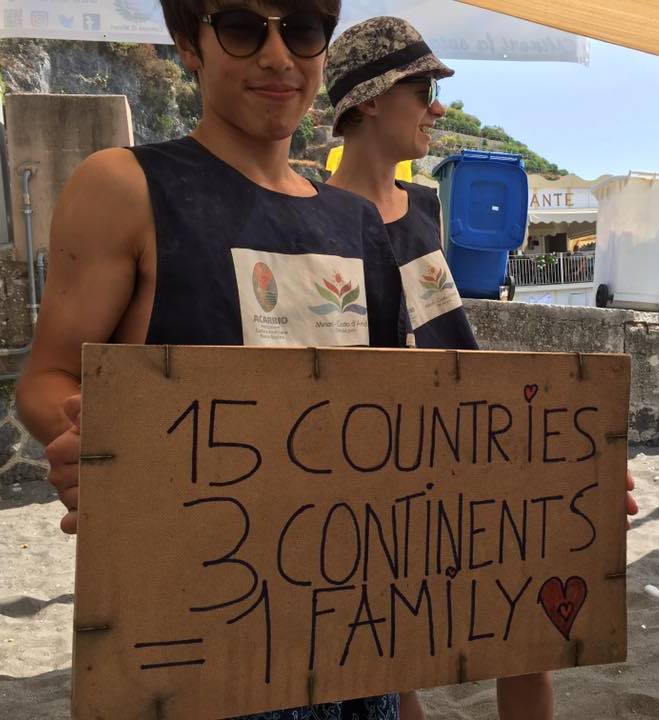 Because Make it Blue is for preserving the environment, raising awareness, meeting Italy, learning new things and connecting people…